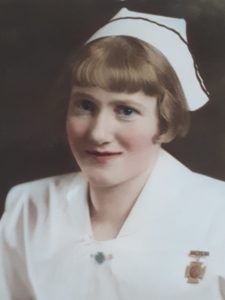 Brad missed having the privilege of meeting his grandmother, she passed away approximately a year and a half before he was given the opportunity to reunite with his birth mom, Marian’s daughter in 1996.   Building a wonderful, close relationship with his mom and two half sisters Brad was able to gather information for this memoir from family stories and notes as well as Marian’s obituary, labeled pictures and genealogical records including the Canadian censuses, 1881 through 1921.

Marian was born Jan 27, 1905 in Wingham, Ontario the fifth child in a family of eleven. In 1908, three-year-old Marian moved with her family to Vancouver.  At the age of eight in 1913 Marian and her family moved to Barnhartvale just east of Kamloops to begin Blackwell Dairy Farm which today still supplies dairy products to local markets.  Marian grew up on the farm with her family and since only a few occupations were available to women of that era she chose nursing over school teaching.In 1925 Marian entered Royal Inland Hospital (RIH) in Kamloops for her nursing education and graduated in 1927 with a class of five students. Interestingly it was the same year that RIH completed its first nurses residence, Brad has a photo of Marian sitting on a pile of lumber in her student nurse uniform. This was in an era when nurses made little money and worked under a private health care system.  Brad’s mom tells him that Marian loved working in the OR and very well liked by the surgeons. The surgeons at RIH talked Marian out of going to Toronto for further study in OR, she was needed at RIH and was going to learn everything there that she could learn in Toronto.

Throughout her full-time nursing career 1927 to 1932 Marian worked at the Tranquille TB Sanitorium and RIH and travelled by train to work in Salmon Arm and Golden.  While working at Salmon Arm hospital Marian met her soon to be husband, Robert (Gerry) Walker who worked on the CNR train as a morse code signaller.  While courting he would blow the train’s whistle when passing by the Salmon Arm hospital, this was Gerry’s way of announcing to everyone that Marian’s boyfriend was passing through town.Marian and Gerry married in Oct 1932 and she stayed at home to raise daughter & son, as was expected in those days. Later she went back to RIH to upgrade working 3 days a week as a supervisor.  When the RIH Alumni Association formed in 1939, Marian became a member and was also president for a time.   Marian was involved with church, community, and her own family which were dear to her heart. Brad’s uncle shared with him  when they met in 1997,  that in the days before Marian passed, she disclosed to immediate family members that her daughter had a boy, a grandson whom she had never met. It is touching knowing that she never forgot him and that it was important for her to disclose his existence in her final days. Marian is the only nurse Brad knows of from both his birth and adopted families.  It is a pleasure for Brad to recognise and share his grandmother’s story.