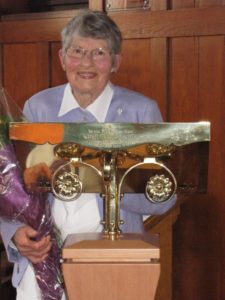 Barbara Owen’s life and career demonstrate exemplary leadership to the community, to the Royal Jubilee Hospital (RJH) and to the RJH School of Nursing. Alumnae. She was born in 1929 in Melbourne, Australia. Barbara graduated from RJH in September 1952. As her nursing career evolved she became the highly respected Head Nurse on the RJH Mother/Babe and Case Room Units. After retirement Barbara dedicated her leadership and organization talents to the RJH School of Nursing Alumnae. She served as President 1960-1962 and again 1995-1998. Her legacy can be seen in the projects she was instrumental in planning and completing.

In the early 1980s Barbara and her classmates realized that the heritage 1909 Pemberton Memorial Chapel was slated to be removed from the site. They were motivated into action and with Barbara’s leadership sought city and hospital and classmate support. Twelve years later the multifaith Chapel was open for spiritual support to patients, family and visitors.

Barbara’s next challenge was to address the accumulation of the school of nursing memorabilia,  nursing records and equipment that had gathered during the school years from 1891 to 1982.  In 2006, the School of Nursing Archives, in basement area under the Pemberton Chapel, officially opened to receive and preserve the treasured memorabilia.

In 2008, again with Barbara’s leadership and the assistance of  Alumnae members and a retired Horticulturalist, a beautiful healing garden was created in the space close to the Pemberton Chapel. Today, patients, friends and visitors can enjoy the beauty of the gardens.

Barbara’s dedication to her family was exemplary. Her husband died in 1963 leaving her to raise five children on her own. She returned to full time nursing in 1968 once her children were in school. She continued to provide leadership and inspiration to her nursing colleagues and practice.

Barbara’s inspiration and leadership has left the RJH School of Nursing with a lasting legacy to preserve the past and to enrich the community through worship and a healing garden.