In Honour of  Sheila (Oliver) Oxholm 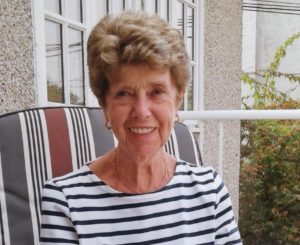 Sheila (Oliver) Oxholm was born in 1937 in Highley Shropshire U.K..  After leaving grammar school Sheila and her good friend Thelma decided they wanted to go to nursing school. Sheila obtained her SRN from Dudley Road Hospital in Birmingham in 1958. In 1959 she obtained a Diploma in Respiratory Disease, then went on to complete her SRM in Midwifery in 1960. Next, in 1962, Sheila obtained a Diploma in Neonatal Nursing at Mount Sinai Hospital in New York City, USA.

Throughout Sheila’s many years of nursing education, she worked as a Midwife in Bridgnorth Hospital in England then at Mount Sinai Hospital in New York. She then moved to Montreal where she held a position as R.N. at the Montreal General Hospital before moving to a position as R.N. at St. Paul’s Hospital in Vancouver in 1968.  Her wealth of nursing experience included R.N. in the Renal Dialysis Unit at St. Paul’s Hospital, Midwife at Stephenville Hospital in Newfoundland, R.N. in the Burn Unit at Vancouver General Hospital, Head Nurse of a Medical Unit at St Paul’s Hospital and Nurse Consultant to the B.C. Government in 1975. During this time Sheila found the time to complete her BSc.N at UBC in 1972.

Sheila married Bendl A.O’Neill Oxholm on June 16, 1973. Her two stepdaughters Susan and Katlyn came to live with them. They were both nurses. Marriage did not interfere with Sheila’s career as her husband was supportive of her career. In 1981 she took a position at the Pearson Hospital, but was recruited to Riverview Hospital as Assistant Director of Nursing.  The Director of Nursing became ill and Sheila served as Director for many months. Sheila left Riverview Hospital to take a teaching position at the Vancouver Community College where she thoroughly enjoyed working with the students.

Sheila has always loved nursing and retired in 2001. Her amazing career demonstrates the incredible contribution she has made, and continues to make to nursing.