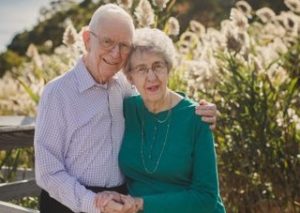 Beth was born in Vancouver BC and raised in the small Howe Sound pulp mill town of Woodfibre. After high school she attended UBC and graduated in 1955 with her BSN and RN.

Following graduation, she worked briefly with the Victorian Order of Nurses both in Ontario and BC, before joining the faculty at UBC as an instructor, mainly in maternity.  Anxious for more challenges, Beth then obtained her Master of Science in Nursing and her U.S. Certification in Nurse Midwifery from Yale University School of Nursing in 1967.

She was faced with a dilemma: should she return to Canada or remain in the U.S. where there were exciting opportunities to use her newly acquired skills? She chose to remain in Connecticut, married in 1972 and acquired a ready-made teen-age family.

Beth was particularly proud of being appointed director of the well-known Preparation for Childbirth and Parenthood Program at Yale New Haven Hospital and of being the first nurse-midwife in Connecticut appointed to the professional staff of the hospital’s medical department of Obstetrics and Gynecology. She worked for nine years in a private practice with three obstetricians when this was a pioneering nursing practice. Later for a change of pace, she joined the faculty at the School of Nursing at Southern Connecticut State University as assistant professor, then tenured associate professor where she mainly taught obstetric nursing.

Family changes and her husband’s retirement resulted in a move back to Squamish BC in 1988. Beth again joined the UBC School of Nursing faculty as an adjunct professor and held an administrative and educator position in obstetrics at Richmond General Hospital for several years. After officially retiring she turned her attention to the support of history of nursing where she made many life-long nursing friends. In 2013 she and John moved back to Connecticut to be closer to family and enjoy retirement living by the ocean.