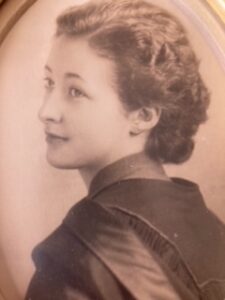 Jean Elizabeth Dorchester (nee Wilson) was born in Vancouver, B.C., on July 4, 1913. Her mother had come to Vancouver the year before from Greenock, Scotland, to marry Jean’s father, who had been the organist in the same church in Greenock where her mother was a member of the choir. Jean always valued her Scottish heritage.

Their first family home was on 7th Street in North Vancouver, from where Jean attended Ridgeway Elementary. When they later moved to Angus Drive in Kerrisdale, she and her younger brother went to Magee High. Jean then continued on to UBC where she made life-long friends as a member of the Alpha Gamma Sorority, and where she graduated from the UBC School of Nursing in 1935. Jean always said that her best marks were in the operating room, but it was in public health and the schools that she received the most satisfaction.

Jean’s father was employed by the Pacific Great Eastern Railway and would later become its General Manager. In 1931, when Jean was 18 years old, she and her mother rode the train to West Vancouver and stayed at the Clachan Hotel on the beach in Dundarave. It was at West Bay Beach nearby, that she met the man she would marry, Frank Dorchester, and together they spent the rest of their lives in West Vancouver where they raised three children. Jean gave up her nursing when she married but continued her interest in public health by assisting with vaccinations in local schools. She also regularly volunteered as a driver for the B.C. Cancer Clinic.

Jean Dorchester died on October 28, 1999, at the age of 86.  She had said more than once that she knew how lucky she was to have lived such a wonderful life.