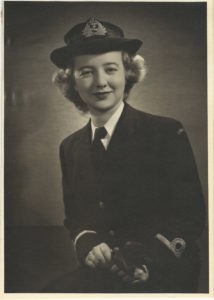 Catherine D. King was born in Ladysmith, BC, where her mother Elizabeth Murdoch Vaughan and her father James King raised her and her younger sister Marion in the house her father built, surrounded by a beautiful garden and offering a view of Ladysmith Harbour. Catherine graduated from Ladysmith high school in 1939 and entered the Royal Jubilee Hospital’s school of nursing in 1940 at the age of 19.

Two years into her training, she was on night duty on Second South when she learned there was a new patient in one of the private rooms awaiting an appendectomy. This was Sub-lieutenant RCNVR Bill Walker, whom she’d known in childhood. It was their first meeting as adults, and it set the stage for a lifelong marriage. Catherine graduated from nursing school in September 1943, spending her first year as an RN on staff at the King’s Daughters Hospital in Duncan, B.C., with her classmate from nursing school Mildred Williams (Bell). In 1944, Catherine got a call to enlist in the Royal Canadian Navy as a nursing sister. She was posted to Halifax and the Atlantic Command hospital there.

Crossing the country by train from Vancouver in November 1944, a small-town girl in the brand-new uniform of a sub-lieutenant, Catherine got advice from a fellow passenger, an army officer, who told her how to return salutes from other navy recruits. Arriving in Halifax in the early morning after a delayed trip through a snowstorm, Catherine was delivered to the nurses’ residence on Gottingen Street, where she was warmly welcomed by young nurses from all over Canada.

She soon threw herself into the war effort, first working in the operating recovery room at the HMCS Stadacona hospital and later tending to war casualties, including the men who survived the torpedoing of the HMCS Esquimalt on April 16, 1945. Right after the war she and Bill Walker married, eventually raising four children after settling in Victoria, BC. Catherine returned to nursing in 1977, working as a senior RN in a supervisory role at the long-term care facility Glenwarren Lodge. She retired from nursing in 1984.

Catherine Walker lived to celebrate her 70th wedding anniversary with her husband Bill and died in her 96th year in the hospital where she had trained.

She often spoke of her nursing years with pride and kept up with the profession as a member of the Alumnae Association of the Royal Jubilee Hospital School of Nursing and in her devoted care of her family members, imparting to her children her strong sense of what it meant to be a thoroughly dedicated nurse.