In Honour of Agnes (Nan) B. Martin

Leaving High School at age 15, against my Headmaster’s advice, I continued my education for two years at Logan & Johnston Pre-nursing College in Glasgow, Scotland in preparation for my dream of nursing training at Glasgow Royal Infirmary. There I was introduced to the apprenticeship style of nursing training. The Hospital was fairly advanced in that we did have blocks of two months throughout the three year programme when we were taken off the wards for lectures and studies.

My training was a time of hard physical work, long hours and strict discipline imposed on us by the Nursing Sisters on each ward. It was also one of camaraderie built on our time living together as students in the nurses’ home. In fact, many lifelong friendships arose from there. I still keep in touch with nursing friends in Scotland and once a year, I meet with other GRI nurses from around the lower mainland and Vancouver Island where we share lots of laughs about the ‘old days.’

Following graduation in 1958, I studied midwifery at Hammersmith Hospital in London, England and received my First Certificate (6 months) from the Central Midwives Board. Rather than completing a further 6 months in the District, I married and went to Canada (Ontario) with my Doctor husband where he had to complete his Draft in the Royal Canadian Airforce for three years.

On return to Scotland, we had three beautiful children and I stayed home to care for the family. Circumstances made us decide to immigrate to Canada in 1968 – this time to Trail, British Columbia and to Vancouver in 1971.

In 1978 I completed a nursing refresher course at BCIT and returned to nursing in 1980. Those were the days when geriatric nurses were considered to be second class nurses and returning nurses were only capable of nursing these geriatric patients!!

I worked in a long term care facility in Coquitlam then in Shaughnessy Hospital extended care in the Jean Matheson Pavilion moving to the newly built Brock Fahrni Pavilion in 1983 as Head Nurse. 1986 found me in the geriatric short term assessment and treatment unit at Vancouver General Hospital and for a year at UBC Purdy Pavilion as a Registered Nurse.  My last ten years of nursing were spent as Head Nurse in Evergreen Extended Care Unit at Lions Gate Hospital.

During those years of nursing and working with older people, I focused on developing a positive image for gerontological nursing. I was actively involved in the RNABC Gerontological Nurses Professional Practice Group and the Canadian Gerontological Nurses Association as well as helping my colleagues gain the clinical knowledge and skills required to practice effectively in this specialty area.

In my practice, I was noted for my role as resident and family advocate and respected for the humanistic manner in which I practised my nursing. 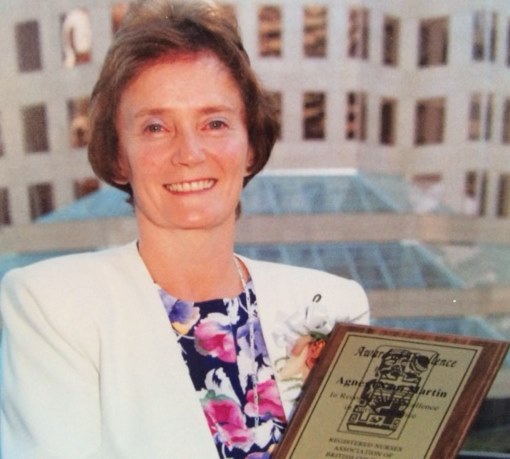