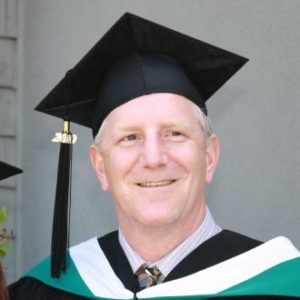 Brad was born in 1963 at VGH and attended high school in Burnaby. He was a Scout member for many years, going  on extended and often challenging hiking trips in the great outdoors. The question of what to do in an emergency led to enrolment  in a St John Ambulance Standard First Aid course. Brad believes this training inspired him to pursue Paramedic and Nursing professions.  Upon graduation from Burnaby Central he took the Forestry Program at Pacific Vocational School graduating in 1981, he then moved to Vancouver Island to begin a career in forestry silviculture and logging.  While logging his strong interest in First Aid led to becoming what is known today as a Paramedic in Industry.   Eventually in 1987 he became interested in instructing part time pre-hospital care courses for Red Cross, St John Ambulance, North Island College and WorkSafe BC leading primarily to teaching the entry level of Paramedic Emergency Medical Response [EMR] programs.  Brad’s thirst for teaching/learning, and managing classrooms grew, so in 1996 he received his Provincial Instructor Diploma and left logging.  While based in Campbell River he travelled Vancouver Island teaching for various industries and the BC Ambulance Service[ BCAS] paramedics. In 2000 he began learning about Emergency Medical Systems [EMS] in the USA and travelled to EMS conferences in North Carolina, Idaho, and Kentucky to teach various courses for the EMT paramedics for their  continuing educational credits.  At the EMT conferences and paramedic competitions, he met many flight paramedics who inspired him to explore this  career option.

Brad decided in 2003 that a flight career as a Critical Care nurse would be more fulfilling and allow more potential for future opportunities.  With his family’s support, in 2004 he began the pre-nursing educational journey at North Island College while working emergency services in mining. During the next two years he completed basic upgrading and seven  nursing courses while awaiting entry into the program in 2006.  The BSN program was comprehensive, challenging and felt like it took forever,   graduating in 2010 with Distinction at the age of 47 was  an amazing endeavour!!  On completion of Brad’s  BCIT Emergency Specialty course  and the Canadian Aeromedical Flight Transport course, he moved his family to Nanaimo to work casual in ER at Nanaimo Regional General Hospital and full time in aeromedical flight services  to be close to Island and Vancouver airports. He specialised in medical repatriation of patients of all nationalities worldwide. The most amazing part was seeing  clients arriving home from sometimes incredibly stressful hospital stays where communication and understanding was a challenge. Brad found the work both challenging yet exciting when travelling to other countries, working with healthcare providers in foreign hospitals, meeting patients and their families and preparing them for safe travel home. He worked in fixed wing air ambulances and on larger commercial planes  with a stretcher and power for monitoring equipment set up in the rear of the aircraft.  Smaller air ambulance flights to Alaska, Mexico, USA, Central America and as far east to Iceland were needed for more critical stretcher patients not suitable for commercial flight repatriation. Brad currently splits his time between the ER at NRGH and the Island Health Emergency Response Ground Transport Team.