In Honour of Ethel Warbinek

Ethel Warbinek is a vibrant personality worthy of the title “Friend of Nursing History.” Since her early retirement from the faculty of the University of British Columbia School of Nursing, she has devoted special attention to promoting and preserving the history and biography of B.C. nurses. She was a founding member of the B.C. History of Nursing Professional Practice Group and has been almost constantly on its executive, having served as president. She is active in the Canadian Association for the History of Nursing, the Vancouver General Hospital School of Nursing Alumnae Association, especially with the Archival Committee of the latter, and the UBC Nursing Alumnae Division.

Born in raised in Vancouver, she took her nursing program at the University of B.C., receiving her Registered Nurse diploma (Vancouver General Hospital, 1956) and her Bachelor of Science in Nursing in 1957. She joined the teaching at Vancouver General for 12 years, during which time she married and became a working mother. She returned to UBC to take her Master of Science in Nursing in UBC’s first nursing graduate degree program, graduating in 1970.

She joined the faculty of the UBC School of Nursing in 1970. During her years at UBC, she taught adult acute care nursing and mainly clinical nursing courses with ar special interest and expertise in peripheral vascular nursing. She was coordinator of undergraduate courses in second and fourth year nursing, was faculty advisor to many master’s degree students, and chaired numerous committees. When UBC gave its first television distance education course — live — on the recently established Knowledge Network, Ethel taught the opening lecture, which was on assessment and management of acute cardiovascular disease. She was also active in the workings of the Registered Nurses Association of B.C. as a district director and served in many capacities on the executive of the Richmond-Delta Chapter.

She remarried in 1973 to Rudi Warbinek and they combined families for a wonderful happy group.

Her many contributions to history of nursing in B.C. include numerous articles in professional and other journals and she is co-author of two books, Legacy: History of Nursing Education at the University of British Columbia 1919-1994 and Richmond-Delta Chapter History 1967-1997: Thirty Years of Professional Growth. 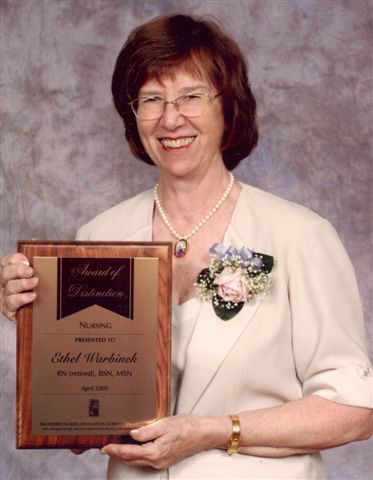