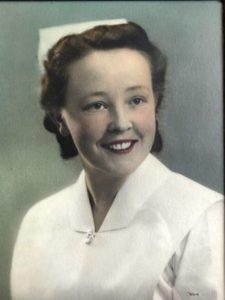 Ruth Northcott was born in Milo, Alberta on June 10, 1914 to Charles and Clara Northcott.  She was one of six children who grew up on a Homestead her Father established for farming. When she was in grade 8, her parents kept her at home for a year as they couldn’t afford the school fees for all six children and they needed the extra help on the farm.

Ruth often recalled her childhood dream of becoming a nurse. She was thrilled when she was accepted into the St. Eugene Hospital School of Nursing in Cranbrook in 1937. She completed her Registered Nurse (RN) qualification in 1940. In a diary she kept as a nursing student she described her respect and regard for her instructors, one Sister in particular, who was very supportive. She also described the required affiliated practice experience in1939 in Kamloops at Tranquille Sanatorium for patients suffering tuberculosis. After graduation she nursed at the Mater Misericordia Hospital in Rossland until 1942.  She then moved to Edmonton to work in the Operating Room at the Misericordia Hospital.

At this time, the new Canadian Pacific Airlines was hiring stewardesses.  They required applicants to be qualified with their RN. Ruth began as a stewardess in the Spring of 1943.  During a flight, a passenger had a cardiac event. Ruth successfully intervened until the flight landed and an ambulance transported the passenger to hospital.  Grant McConachie, founder and general manager of the Airline, wrote a letter expressing his appreciation for her skills and dedication. In December 1943, she married Larry Dakin, a pilot with Canadian Pacific Airlines and she continued to be a stewardess on a part-time basis for a few years.

Throughout Ruth’s life she was actively involved with music. Beginning as a child she played the piano from music composition and “by ear”.  She played the trumpet and violin in musical ensembles in her younger years. She was the church organist while living in Rossland, Edmonton and Vancouver. As a mother to three children, she continued to be actively involved in music in leading the Shaughnessy Heights United Church children’s choirs and hand bell choirs.

Ruth lived life with enthusiasm and exuberance, easily engaging with people and maintaining many long-lasting friendships until her death in 2012. She had a “zest for life”.