This two-panel marble sculpture by Beatrice Lennie, one of Canada's top sculptors of the 1940s, was commissioned for the original Main Entrance of the 1940 Shaughnessy Military Hospital building, erected by the federal government. The inscription reads: Canadian Medical Corp. The cornerstone was laid by Ian MacKenzie, P.C., K.C., Minister Pensions and National Health, 17 Oct. 1940.

Edith Beatrice Catharine Lennie (1905 - 1987) studied at the Vancouver School of Art under various great Canadian artists and at the California School of Fine Arts, San Francisco. As a sculptor, she also executed significant commissions for the Hotel Vancouver lobby, the exterior of the College of Physicians and Surgeons in Vancouver, the exterior of the Lipsett Indian Museum in Hastings Park, Vancouver, and the pylons of the Patullo Bridge in New Westminster

One of the two panels showed a nursing sister assisting a wounded soldier; the other depicts a surgeon lifting a wounded soldier. The man who posed for the wounded soldier was apparently a Leigh Fraser; Mr. Fraser visited the hospital site in November 1996 and told Alison Osbourne, Community Liaison Officer of Children's Hospital that he had posed.

The 1940 Shaughnessy Military Hospital was closed in 1992 and the buildings integrated into the Oak Street campus of Children’s & Women’s Health Centre site. The building with the original entrance is now named the Shaughnessy Building. Beatrice Lennie’s sculptures can still be found at the sides of that original entrance; now overlooking the outdoor courtyard of the cafeteria.

In 1999, the B.C. History of Nursing Group established a note card showing the Nursing Sister panel to commemorate the 100th Anniversary of the Canadian Nursing Sisters who accompanied troops to the South African (Boer) War in 1899; the card was dedicated to future nurses who will face the challenges of the next millennium.

This monument was established by the 12 (Vancouver) Medical Company Unit Associations and dedicated in 1995. The plaque reads: “Dedicated to the Memory of Medical Personnel who served with the Canadian forces in Peace and War “Militi succurrimus”. 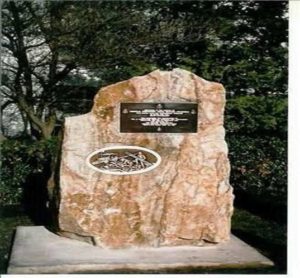 St. Vincent’s Hospital has since been demolished. The monument now has a place in the garden of Brock Fahrni Pavilion.