This stained-glass window, erected by the Vancouver Unit of the Canadian Nursing Sisters Association, honours Nurses who served in World War I). It is one of 15 windows in the Canadian Memorial Church, was erected as a "Memorial to Peace."

Designer of the window was Jack Ramsdon of the British Society of Master Glass Painters.

In 1989, the window needed restoration and a note card showing this picture was produced by the Nursing Sisters Association, Vancouver Unit, to raise funds to restore the window and provide for its perpetual maintenance. By 1992, sale of these cards had also provided funds for a scholarship through the Canadian Nurses Association. In 1992, the B.C. History of Nursing Group took over distribution of these cards to promote nursing history.

Designed and funded by Major J. Mathews, Vancouver City Archivist, as a memorial to his wife, Emily Eliza Edwardes Mathews, this stained-glass window is a tribute to the nursing profession in Vancouver. Nursing in Vancouver dates to 1873, when the first lay nurse began providing care in her home.

The Canadian Nurses Association met in Vancouver in 1950 and attended the unveiling.

In 1996, the B.C. History of Nursing Group developed a note card based on this window as part of its ongoing promotion of nursing history. The card also commemorated the History of Nursing International Conference, which held its meeting June 12-15, 1997 in Vancouver; an interdenominational evensong was held in the Cathedral on June 14, 1997.

This stained-glass window of Florence Nightingale (1820-1910) was dedicated in 1986  by Canon Whinfield Robinson, an Anglican Rector, in memory of his wife Doris (“Dorie”) Comley Robinson.

Doris Comley was born on June 21, 1907 in Ladysmith, on Vancouver Island, and met her future husband while they were students there. She graduated as a nurse from the Ladysmith General Hospital in 1929; as this was a small school of nursing, she also attended Vancouver General Hospital for pediatric and obstetric affiliations. She and Whinfield were married on June 8, 1931.

The window, made by G. Maile and Son, Canterbury, England, makes use of other stained-glass windows at St. Mary’s Church.

A photograph of the window was used for the fourth card in a series produced in 2000 by the B.C. History of Nursing Group to recognize nursing monuments in Vancouver. Funds raised from this card support the Archives Projects of the Group.The photograph was taken by Edward Trody of Vancouver.

The photograph has also been used, with credit to the Church, the B.C. History Group, and the photographer, by the Canadian Museum of Civilization in its presentation on Nursing (2004-2006). A Christmas card featuring the window was also reproduced by the School of Nursing, King’s College, University of London in 2006. 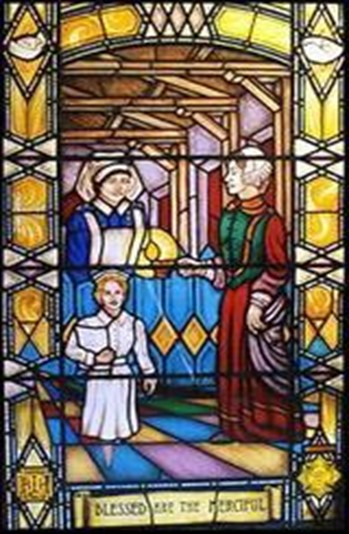 This commemorative window was originated in 1984 by Nursing Sister Wherry, and created by the Nursing Sisters’ Association (Victoria) with support from Padre Peter Isles and Veterans Affairs Canada. Maurice Hartle, an orderly at the D.V.A. Hospital, designed the window.  Tom Mercer of Orillia Glass made the window for $5,000 – which the Nursing Sisters raised.