In 1929, the Vancouver Medical-Dental building, an art deco-style skyscraper of the era designed by McCarter Nairne and Partners, was built on the corners of Georgia and Hornby Streets in downtown Vancouver. At about the 10th-story level, the building was graced with 11-foot-high, terra cotta statues depicting a Nursing Sister of World War I, one on each of the building’s three visible corners.

Architects John Young McCarter (1886- 1981) and George Colvil Nairne (1884-1953) had both served overseas during World War I. McCarter was seriously wounded and credited the Nursing Sisters with saving his life. They founded their architectural firm in 1921, and when they obtained the contract for the Medical Dental Building, they decided to honour the Nursing Sisters. The sculptures were designed by Joseph Francis Watson. A local joke among the medical users of the building was that the statues represented the Rhea Sisters – Gono, Dia, and Pyo.

In June 2003, replicas of the same statues were made to adorn the new Technology Enterprises Facility (TEF) III on the University of British Columbia campus. This building and a memorial plaque seen in the pictures below, was designed by Chernoff Thompson Architects, who apparently liked the statues and their history.

TEF is a commercial venture for the University and is associated with the University- Industry Liaison Office (UILO) at the University of British Columbia (UBC); this office is responsible for licensing technology and assisting spin-off companies in various aspects of formation and financing. 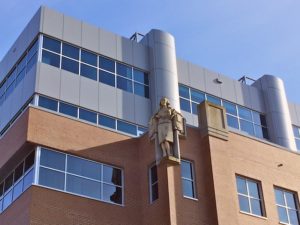 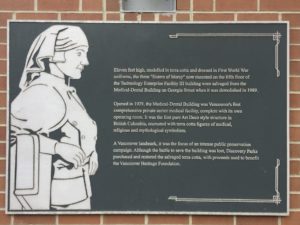