This marble, life-size statue of a student nurse was made by well-know sculptor Herbert Apt. The story goes that this statue was in front of St. Paul's Hospital but, because of some re-building, the statue had to be moved. The statue was to be given to the University of B.C. School of Nursing, to be erected in front of its proposed new building, but this was not happening, so Dr. William Gibson said that he would arrange for it to be kept in the UBC Library until the School of Nursing could find a home for it. This information came to light during research for a book on the history of the UBC School of Nursing for its 75th Anniversary (1994) and the statue was located. 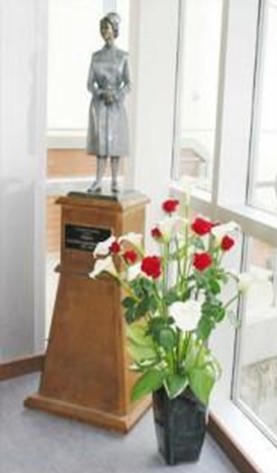 In 2003, The Alumnae Association commissioned Nathan Scott of Victoria to create an image of a Royal Jubilee Hospital Graduate Nurse.  The RJH nurse statue was placed in the entrance way to the Chapel in honour of all nurses who graduated from the RJH School of Nursing during its ninety years of educating nurses.  The commemorative statue recognizes and celebrates the contribution of the RJH nursing graduates to their nursing profession and history.

The plaque on the base of the statue reads:

In 1992, the Vancouver Museum took the least-damaged head from one of the broken statues for safe-keeping; this was also patched and repaired and is held for display by the Museum. A fiberglass replica of the head also is on display in the lobby of Cathedral Place.

In 1989, the aging, but still striking, building was imploded to make way for a new 23-storey office tower. The Shaw Tower at Cathedral Place is a dramatic post- modern structure designed by Vancouver architect Paul Merrick. Cathedral Place was developed through a joint venture with Sir Run Run Shaw of Hong Kong to realize a long-time dream of Charles Shon to redevelop the Georgia Medical-Dental Building site creating an enduring architectural landmark. A public campaign was raised to save the original statues for the new building. However, as these proved both extremely heavy and difficult to remove from the original building, replicas had to be made. When the new tower opened in 1991, the replicas were mounted at about the third-storey level, easily visible from the streets.

Mario Tinucci of Ital-Decor arranged to make the castings so that new fiber-glass figures could be made. Ital- Decor took one of the originals (the one least damaged) and re-molded it to make it “whole,” then made fiber-glass replicas for the building. The patched original now is on display at their premises on Hastings Street.

This 21-inch bronze head of Nursing Sister Emily Eliza Edwardes Mathews, by British Sculptor Sydney March, honours her as co-founder, with her husband, Major James S. Mathews, of the City Archives of Vancouver.

Emily Eliza Edwardes was a 1902 graduate of the Vancouver General Hospital. She served as a nursing sister in England during World War I and was mentioned in dispatches for her services. She had her own business as a nurse therapist prior to her marriage in 1920. Following her marriage, she assisted and supported her husband in collecting, cataloguing, and preserving Vancouver documents, memorabilia, and artifacts of Vancouver – the start of the City’s Archival collection.

Although she is credited for her work in supporting her husband in the development of the Vancouver Archives, little is known about her. 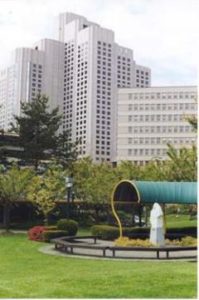 Dedicated to the Pioneer Nurses of British Columbia 1900-1919 - placed in memory of Margaret Kennedy Campbell, by son, Henry Campbell, May 1999 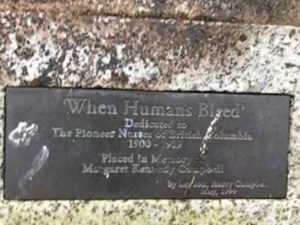 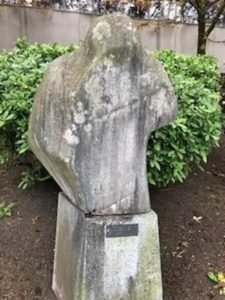 Original location of the sculpture was at the Vancouver General Hospital, 899 West 12th Avenue as shown above. It was moved to its present location just outside VGH Emergency.

The artist Robin Campbell said "Own this work as your own if you so choose; examine it, question it, deride it or admire it. It will satisfy some aspect of your being. I have left the original drill marks which extracted the stone from the ground. These symbolize the core issues which we must all examine without which true healing does not occur. As issues resolve and wounds heal the capacity for integrated action is rejuvenated and we can go forth free from that which binds."