Located at the Family Respite Centre Health and Home Care Society of BC
2711 East 49th Avenue, Vancouver BC 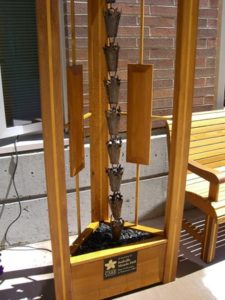 Isabelle Maude Hill was born c. 1871, in Hillsborough, Ontario. She graduated from the Hamilton General Hospital, Ontario in 1900. In 1901, Isabelle went to the Victorian Order of Nurses (VON) training school in Montreal to learn to practice home nursing. She came to Vancouver in 1901 to become the first permanent VON nurse.

Isabelle Hill also played a pioneering role with the anti-tuberculosis society where she was the first nurse in BC to devote herself full time to this work. She set up a free clinic, sponsored by the Rotary Club, where she did case finding and follow-up visits. Her nursing and organizational abilities were recognized, and she was sought as Matron for community hospitals in Sumas, Washington (1909) and Port Alberni, B. C. (1913).

Isabelle Maude Hill died in St. Mary’s Hospital in New Westminster, B. C. on February 19, 1936, at 65 years of age. She is buried in a New Westminster cemetery, in a grave without a stone or marker.

The Isabelle Maude Hill Memorial Fountain, sponsored by Helen Shore, was unveiled in June 2006 and stands as a lasting reminder of a nurse who helped lead the way for the VON and for the nursing profession in this province.

The small fountain is located in a grove of trees on the National Section at Ocean View Cemetery in Burnaby, B.C.

Neilson was a young nurse, a 27-year-old graduate of the Vancouver General Hospital, who was working in the Trail Tadanac Hospital when a Nelson man, a WWI veteran and businessman, entered the nurses’ home one morning and shot her to death. The story is told that the killer was known to Neilson’s family and had been asked to deliver a tin of cookies to her by her mother in Vancouver. The killer then shot himself, recovered from his wound, was subsequently tried, found guilty and sentenced to death.

The town was shocked at the callous deed and smelter employees collected over $1,300 as a memorial fund to the popular girl.

The photo above is from the Stuart Thompson fonds, City of Vancouver Archives.