This pavilion, shown below, built in 1946 at Shaughnessy Hospital, originally was a 100-bed unit for patients suffering from tuberculosis who returned from World War II. The building was named in honour of Jean Matheson the second matron of Shaughnessy Hospital and an early expert in the nursing of tuberculosis patients. In recognition of Matheson’s role in caring for tuberculosis veterans, it was named the Jean Matheson Memorial Pavilion and an oil portrait of Miss Matheson in uniform was hung in the entrance lobby.

The building, whose exterior shell was designated a city heritage building, was closed in 1994 and in 2008 was remodeled to become the Mental Health Unit of BC Women’s and Children’s Hospital/Health Centre. Despite protests Matheson’s name was removed from the building. 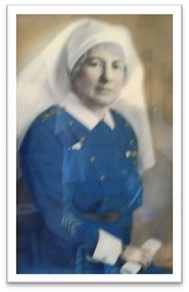 Jean Matheson was a dedicated Canadian career nurse of the early 1900s, whose roles as a nursing leader and particularly as a Nursing Sister during and following the First World War deserve recognition. She received the Mons Medal, the Victory Medal, the Royal Red Cross and the King George Jubilee Medal for her wartime service. Following her service overseas as matron of World War I’s No. 5 General Hospital, she became the second matron of Shaughnessy Hospital serving from 1919 to 1937.

After World War I, Miss Matheson began work at the Fairmont Military Hospital at 33rd and Heather. In 1920, when the main Shaughnessy hospital building opened, she moved there; since senior staff lived in the hospital in those days, she had a small suite in the hospital and was available almost all the time for patients and staff who had deep affection for her. She retired in 1937 and died in Winnipeg in 1938. Her body was brought back to Vancouver for burial in Mountain View Cemetery near the graves of “her boys” – the veterans who had died at Shaughnessy.

Following an initiative by the BC History of Nursing Society the portrait of Miss Matheson, which originally hung in the Pavilion, now hangs in the nearby Brock Fahrni Pavilion, which still has some long-term care beds for Veterans. This Jean Matheson oil portrait was done by Steffens Colmer Studio, Vancouver, B.C.

Research for the above note on Jean Matheson was done by Glennis Zilm from various sources, including the B.C. History of Nursing Group files on Matheson and the preparation carried out for a nomination of Miss Matheson for a designation as  “Person of National Historic Significance” by Parks Canada.