Monument to Women Including Nurses 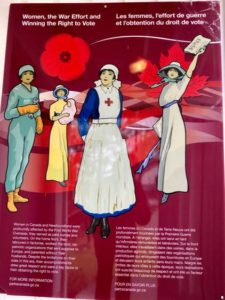 This plaque was erected by Parks Canada at the Fort Rodd Hill and Fisgard Lighthouse National Historic Site in Esquimalt BC to commemorate Women, the War Effort and Winning the Right to Vote. 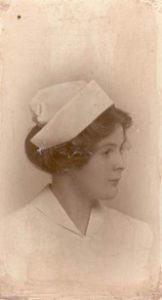 Beatrice [Trixie] Eugene Bradshaw is listed in the Saanich honour roll and her photo is on the plaque above page. She was the daughter of Sarah Payne Windsor and William George Bradshaw, born in Newfoundland and named after Queen Victoria’s youngest daughter. A few years after her father's death, her mother, uncle and siblings moved to Victoria.  The mother allegedly believed the girls would have to earn their own living, believing Victoria would provide them the best opportunity.   Trixie enlisted with the Canadian Expeditionary Force in 1918, a year after her graduation from The Royal Jubilee Hospital School of Nursing, from a class of 13. She served at the #11 Canadian General Hospital at Shorncliffe, England.  Trixie did not marry or have children, she lost her fiancée in the war.. Following the war, she worked at Resthaven Veterans’ hospital,  Later she was the school nurse at Oak Bay for many years. She died of cancer and is buried with two other sisters in St. Luke’s churchyard.   A framed oval sepia portrait of Trixie Bradshaw is held by the Royal Jubilee School of Nursing Archives. A portrait of Trixie in uniform is held by the Craigdarroch Castle Archives. 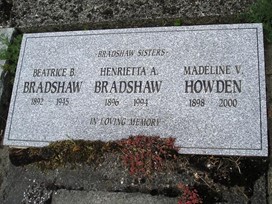 Hannah ”Nance” Jennings Bradshaw was the second daughter of Sarah Payne Windsor and William George Bradshaw. She was born in 1891 in Placentia, Newfoundland.  Nance, was a stenographer, but later graduated from The Royal Jubilee Hospital School of Nursing in 1915 and went overseas with the #5 Canadian General Hospital that same year. On September 14th, 1915, Nance enlisted with the Canadian Expeditionary Force in London, England. She was stationed in Shorncliffe, England, Heliopolis, Egypt and Salonika, Greece, and Gallipoli. While overseas, Nance secretly married Major James Thomas Wall, a physician and surgeon born in Nanaimo, but from Vancouver, who also was with #5 Canadian General Hospital.  After the war they lived in Vancouver and had 3 children.

Hannah is also mentioned in the Saanich honour roll from the Great War.