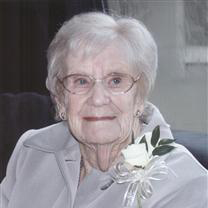 Jean was born in Scotland and in 1935 Jean began her nurses training in infectious diseases at Knightswood Infectious Diseases Hospital in Glasgow and in 1938 started her 3-year General Nursing Training at Glasgow Western Infirmary. She immigrated to Canada in 1951 and began and began her 27 year career at the Vancouver General Hospital  mainly as an infectious disease specialist.   She had three sisters and two brothers, one of whom was killed in action in WW II.  Her awards include a Certificate of Honour from the British Red Cross for her work in smallpox, and the Van Dusen award for her hospice work.  She was a life member of the Hospice and the VGH SON Alumnae Association, and a Paul Harris Fellow for the Rotary Club.