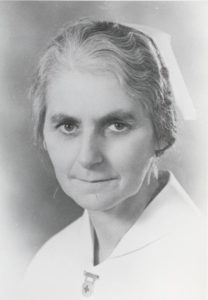 After graduating from Normal School in Calgary, Anne spent many of her early years teaching, becoming acting principal of the Armstrong school in 1914.  She entered Vancouver General Hospital’s School of Nursing in 1924, graduating in 1927 and receiving the Alison Cummings medal for the highest standard in medical nursing.  She became a teacher in the school immediately on graduation, known for her “devotion to duty and unflagging energy”.  In 1931 a scholarship allowed her to attend McGill University.  After her retirement in 1947 she wrote a history of the VGH School of Nursing, and continued to work part-time at the RNABC office.

Students recall her tremendous sense of humour, the kindly twinkle in her eyes.   The Anne Cavers Memorial Scholarship was created in her name.