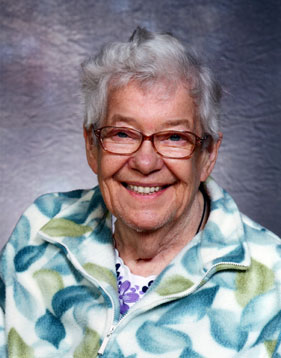 Kirstine Griffith, a long- standing History of Nursing member and loyal supporter of our group, died on December 5, 2014 following a brief illness. I will remember her wonderful smile and friendly greeting, always interested in others and nursing events.  Many will remember her hand-crafted cards with pressed flowers. Kirstine or “Kris” as she was known by her nursing friends, was a devoted wife, mother, and nurse.

Kirstine was born in Vancouver and from an early age always knew she would become a nurse. Most of her childhood was spent in Chemanius and later the family moved to Vancouver where she attended high school. She enrolled in the UBC School of Nursing program in 1940 graduating from the Vancouver General Hospital School of Nursing portion of her course in 1944 and from UBC with a BASc(N) in 1945. During her university years she met her future husband, Dr. Don Buckland, who later became a well known and highly respected Forestry Professor.

Following graduation, Kirstine and Don married, and she worked for the Saanich Health Department for two years.  The family moved back to Vancouver and Kirstine spent the next several years looking after Don and their three children Elizabeth, Dorothy, and David. Don’s eyesight began to fail as a complication of diabetes and Kirstine assisted him with reading, writing, and just getting around as a visually impaired person.  Tragically, Don died in 1956 at age 38 and Kirstine returned to her nursing career, becoming the VGH Student Health Clinic nurse. Later she taught various courses in the School, taking time off to earn a MA degree from UBC.  She married Braham Griffith in 1969 and remained at VGH until her retirement in 1982. Braham died in 1998.

In retirement she remained active with several projects such as dressing VGH dolls in uniforms from 1896-1975. These are now part of the VGH School of Nursing Alumnae Archives.  Never idle, in 1996 she wrote the “The Religious Aspects of Nursing Care” which outlines the practices of 34 religions. Proceeds from the sales have been directed to nursing scholarships.  Kirstine was an active member of the UBC School of Nursing Alumnae Division and over the years, graciously hosted many meetings at her home. I fondly remember visiting her and was amazed at her ability to knit, read, and talk all at the same time – obviously a master at multitasking. She will be missed.

To learn more about the Adam and Buckland families you can come to our BCHNS Archives at UBC and view the CD  “Don’s Story” compiled by Kirstine Griffith in 2005 in memory of her husband.