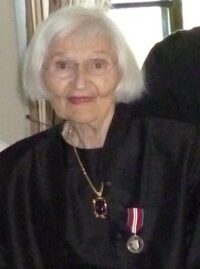 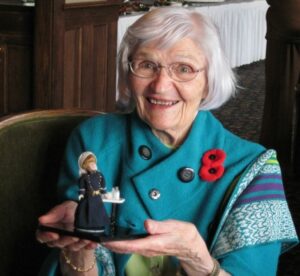 Nina Rumen, a founding member of the BC History of Nursing Society has passed at age of 95 years, following many years in a Care Facility.

Nina was born in 1927 in what was then Poland, now Belarus.  At age 2 she “brought her mother to Canada” to join her father, who had immigrated earlier to the Fernie/Cranbrook area of BC.   She graduated from St. Paul’s Hospital School of Nursing in Vancouver in 1949 and joined the Royal Canadian Army Medical Corps in 1951.  She was sent to Churchill, Manitoba [1952-54], then to Iserlohn, Germany with the British Army of the Rhine, then to Lahr, Germany.  She served with NATO from 1970-72.

Nina completed her Bachelor of Nursing from the University of Toronto.  Following retirement from the Services, she moved to Vancouver working on short term contracts with various agencies.

Before the BCHNS was founded, Nina was active in the collection of Oral History tapes for the RNABC’s 75th anniversary.  As a founding member, Nina was the BC History of Nursing Group first Treasurer and served on many of it’s committees throughout the years.  Nina served with distinction on the planning committee for the History of Nursing International Conference in 1997.  She was also very active with the BC Registered Nurses Foundation, the St. Paul’s School of Nursing Alumnae and the Nursing Sisters Association of Canada, and always a strong advocate for Nurses.

In 1999 Nina received the RNABC member recognition award for her dedicated participation in professional activities.

Nursing Sister, Nina Rumen was among other recipients of the Queen’s Jubilee Medal August 2012

Nina has been a valued member of the Society, a pillar of our group and received Honourary Membership April 14, 2003.

Nina was enthusiastic and loved a challenge, she would battle for what she believed was right no matter what the odds were, thus in 2006, the history group mounted the Florence Nightingale Opera thanks to Nina’s belief and determination.

Nina truly enriched our group and our lives!!

Written by Sheila Zerr & Lenore Radom on behalf of the BCHNS