Dr. Beverly Witter Du Gas served as the first and founding President of the B.C. History of Nursing Society. In this role she was instrumental in guiding the initial efforts to establish the group's constitution and committee structure. In her role as past President she served as nominations chair, she gave a keynote address at the 1991 Annual meeting, and she chaired the abstracts committee for the International History of Nursing Conference in 1996.

Dr. Du Gas professional career has combined nursing, teaching, international consulting, and writing. Her textbook, Introduction to Patient Care: A Comprehensive Approach to Nursing, published in 1967, was widely used throughout Canada and the U.S., translated into six languages and used in schools of nursing in some 40 countries.  In  recent  years  she  has written a book  of  stories  about  her  life  in  India  and  a  second  book about  the  VGH  School  of  Nursing. 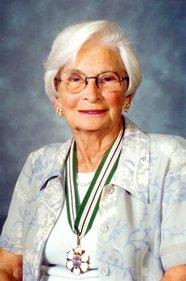