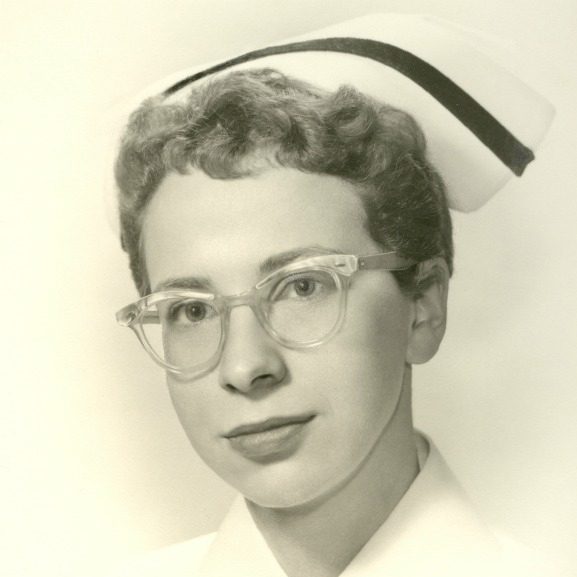 Lois Blais was born in North Bay, Ontario. She received her RN Diploma from St. Michael’s Hospital School of Nursing in Toronto in 1959, and in 1967 completed her BA in English and philosophy at UBC. In 1993 she returned to university to enroll in the Masters inNursing program at UBC. Lois worked at St. Paul’s Hospital, Vancouver for most of her career, from 1969 occupying a number of senior administrative positions. She was also Head Nurse for the Cancer Control Agency of British Columbia from 1977-1981.

She was also active on many RNABC nursing committees, including Public Relations, Programs, and Philosophy and Nursing Practice; she was also Director-at-Large for the Board of the RNABC from 1976-1979. She chaired the British Columbia Institute of Technology Med/Surg Advisory Committee from 1986-1988, and later was a member of the same committee. From 1987-1989 she was President of the Vancouver Metropolitan chapter of the RNABC, and later chaired Langara College’s Holistic Health Program Advisory Committee. . She was recognized with an Award of Honour from RNABC in 1994.

During the 80s Blais took a break from her nursing career to assist in building a 36 ft. Wharram Catamaran. From 1981 to 1983 she sailed 15,000 miles off shore, including to Mexico, Hawaii and Micronesia. When she retired in 1999 she joined the History of Nursing group, where she became successively treasurer, vice-president and president, and also chaired the Archives Committee. She also studied energy alternative therapies and was an Integrative Energy Healing Practitioner.