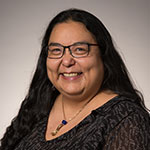 An aboriginal from Kingcome Inlet, Tania has survived racism and discrimination to become a specialist in Emergency and Aboriginal Health.  She has been a RN in BC for 12 years and received a Masters degree in the Nurse Practitioner program at UBC   in 2010 and is active in the ARNBC, becoming president elect in 2015 and president 2017-2019. Her goal is to empower nurses to use their voice, and work together to benefit both the nursing family and the health of all British Columbians.  She has played a key role in advancing the Association’s work around aboriginal health nursing. She currently works full time as a general duty nurse in her father’s rural village Alert Bay BC.