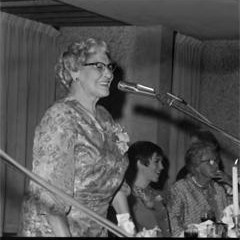 Ruth Morrison was a newspaper reporter in Halifax before entering the Toronto General Hospital; School of Nursing.  After a number of jobs in Saskatchewan and the Maritimes, she took her BSN and MPH in nursing at the University of Minnesota.  In her subsequent position at UBC, she played a major role in promoting public health nursing in BC by introducing public health nursing into each year of the baccalaureate program.  This helped meet the need for more qualified public health nurses, especially in the remoter regions of the province.

Ruth was energetically active on both national and provincial health committees.  She was president of the Canadian Association of University Schools of Nursing in the 1950s, and a member of the World Health Organization’s Expert Panel on Nursing in 1951.